PlenEat, a project that boosts the rural-urban virtuous circle

On their website they define themselves as a project for organic and seasonal meals for companies. But in reality the company has a much more ambitious goal: to promote the rural-urban virtuous circle through different actions that have 100% certified organic food as a core ingredient. After participating in the EIT Climate-KIC accelerator, the co-founders of PlenEat, Carlota Mateos and Juan Vila, are still working hard to ensure that this project generates the greatest possible impact for both society and the Planet. 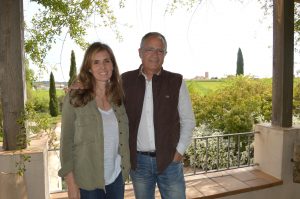 Carlota is also funder of another company, Rusticae, which seeks to promote the development of rural areas through tourism, Rusticae. With PlenEat they wanted to go a step further. They have promoted a project called Rural-City, which on the one hand is committed to significantly increasing the demand for certified organic food because chemical-free food is the real way to achieve a healthier society and a healthier planet. They achieve this through company canteens and catering for events. They currently work for 14 companies, including HP, Disney, Reale, BBVA, ICEX and the Instituto de Empresa. This line is complemented by a line of sales through vending machines and home-delivered menus, which is currently in the pilot phase. In addition, they have entered into a strategic alliance with Sodexo, the largest company in the sector worldwide.

But the founders of PlenEat have not only wanted to focus on the demand side, they also want to attack the origin, the production side. During the first half of 2021 they will launch a project in La Manchuela (Cuenca, Spain) that aims to transform conventional chicken production into organic production. To do this, they are going to set up a processing plant for chicken products. And to open the door for farmers in the region to switch to organic production, this plant will have a line of hamburgers and vegan meatballs made from certified organic pulses.

Carlota Mateos says “the project has a clear triple impact: it improves the health of the customers who eat our organic food, stimulates the economy of rural areas of depopulated Spain and protects the environment, as organic production avoids the use of tons of chemicals that pollute the soil, aquifers and air, while guaranteeing animal welfare”.

Carlota explains that in her two projects there is a common aspect: “our commitment to sustainability and to revitalising the rural areas of depopulated Spain”, although she assures that in this new project there is a new aspect in relation to the scope of the challenge, which is enormous: “the fact that climate change is a reality and is already lurking here”.

That’s why the co-founder says the biggest challenge is to work against time. “In order to contribute to the fight against climate change, we need PlenEat to have a big impact in the shortest space of time, so increasing demand exponentially is key to this project. And that’s where we are, despite pandemic”. On the other hand, they are working at full speed in spite of the circumstances and plan to have the Field part of the project implemented before the summer.

The pandemic is an additional factor of risk, uncertainty and difficulty for entrepreneurs, but Carlota stresses that “if the pandemic has revealed anything, it is the vulnerability of human beings and the fragility of the planet. PlenEat is a company that provides a solution to both problems. We have no doubt that once the pandemic is over, PlenEat’s position will have strengthened exponentially”.

Every ambitious project requires financing that is up to the task. To date, they have raised several capital increases, which, together with the bank financing, amount to more than 4 million euros. They have yet to complete a capital increase of close to €600,000.

Asked about the failures experienced as valuable learning experiences, Carlota was clear. “All failures are valuable and necessary. It’s like life itself, what human being doesn’t advance by making mistakes and learning from them? We have to stop talking about failure as “the big deal”. Failure is part of the path and it helps us tremendously to learn and improve our projects, our trajectories and our lives”.

Her enthusiasm is reflected when we ask her to highlight a success: “The greatest success is to wake up every day knowing that every minute of your work ‘counts’, that you are working for the common good and for future generations. That is always a success,” she says.

For her, passion is the most necessary quality in an entrepreneur to make his or her project successful: “A powerful vision that you are passionate about, a clear idea of what need you are addressing, a focus, concentration, perseverance and patience. That’s all it takes!”

If she could start all over again, Carlota would change a few things when it comes to tackling the project. “Maybe I would measure the risks and the efforts to carry it out better”. However, the passion and enthusiasm she transmits makes her rectify her answer immediately: “But to be honest, I don’t think it would be smart. If we entrepreneurs knew in advance the risks and efforts involved in launching our projects, most of the time we wouldn’t take the plunge. And that would be a tragedy”.

In this sense, Carlota tells us that luckily the entrepreneurial ecosystem in Spain today is alive and stimulating. “When I started in Spain, the word entrepreneur was not even used. We have grown in the last 20 years and a dynamic ecosystem has been created, with many talented and involved entrepreneurs, but with a long way to go in terms of public policies that stimulate entrepreneurship and the needs of all its stakeholders, starting with attracting and facilitating national and foreign investment in all phases of the company”.