A second life battery prototype was built at the end of 2020 and now is ready to be installed at its final location in “La Pinada Labs”, as part of a fully autonomous solar installation. 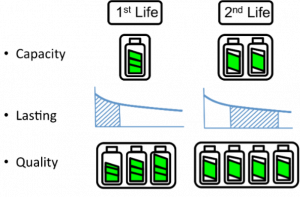 And the good quality of the cells and their excellent heath was demonstrated during the test, when the battery followed the charge and discharge cycles quietly and below 24ºC in continuous operation, with no degradation observed up to date. Low temperature operation is not only a sign of quality but also a guarantee for a long and peaceful life.

The battery is compact, even more that their counter parts in the market, and is able to maximize the savings of a family home with its 6.6 kWh of capacity, in a safe and peaceful operation during day and night for more than 10 years.

But this type of batteries are not only intended for residential applications, but many others where they can replace old lead batteries with many advantages in capacity and sustainability. And this is becoming more and more valued by city councils, that are keen to use them in other uses such in recreational parks or gym´s or to store energy in public buildings and infrastructures.

City councils such as Ribarroja del Turia and Paterna (Valencia) are participating in the project through the Think Tank Smart Cities of AVAESEN, Valencian Region Energy Association. Important environmental organisations such as ECODOM (Italy) and Recyclia (Spain) are coordinating their efforts within the project to make the re-use of batteries a reality that can be transferred to the rest of the European Union countries.

The project is led by the Universidad Politécnica de Valencia and Sustainable Towns, promoter of the eco-barrio La Pinada, which will exploit the technological solution of second-life batteries. Other companies such as lbufera Energy and Fibernova complete the project’s industrial commitment.