The Spanish start-up Bound4Blue is unstoppable in 2020. Cristina Aleixendri, co-founder and COO of the company, has been included in the Forbes “30 under 30: Europe 2020” list. In August, the company was selected by the EIT Crisis Response Initiative with a grant of 500,000 euros. And now Aleixendri has been awarded the Innovation and Women’s Entrepreneurship Award by the Spanish Federation of Women Managers, Executives, Professionals and Entrepreneurs (FEDEPE).

The Spanish company Bound4Blue has been achieving milestones for a year despite the situation. This company has developed a system that helps ships to save fuel by using the wind to drive their engines. To date it has had a turnover of more than five million euros. The project was incubated by the European Space Agency and in 2019 was included in phase 3 of the EIT Climate-KIC acceleration programme in Spain.

“We found soft sails installed in sailing boats or yachts, but none in commercial vessels. We believed we could apply our knowledge in aeronautics to build a high-lift device for the shipping industry adapted to its requirements, that could be the solution to the two showstopper challenges they are facing: high fuel operating expenses and emissions reduction pressure from international entities”, Aleixendri said in an interview published in Forbes.

Prior to Bound4blue, the co-founders worked on the design, manufacture and launch of scientific capsules into space, the construction of efficient wind towers and the deployment of geodesic-quality sea-ice drifting buoys in the Arctic.

This year Cristina Aleixendri, co-founder and COO of the company, has been included on the Forbes “30 under 30: Europe 2020” list, which highlights the 30 most influential young people in Europe under the age of 30. Aleixendri is an aeronautical engineer who has worked in different technology companies. She is the author of several research projects and has developed three patents in the use of sailing.

After its passage in 2019 through the third phase of the EIT Climate-KIC accelerator in Spain, Bound4Blue has been one of the companies selected by the European Institute of Innovation and Technology (EIT), in its EIT Crisis Response Initiative, which contributes directly to the European Union’s response to the COVID-19 pandemic. To this end, EIT Climate-KIC is investing €4 million in nine climate companies to help them recover from the impacts of the COVID-19 crisis.

The Spanish company Bound4Blue has been one of the companies selected with an amount of 500,000 euros. A total of 301 applicants from 25 countries applied for funding under the “Extraordinary COVID-19 Venture Support” call launched by EIT Climate-KIC in May 2020 to support highly innovative climate impact ventures whose business has been impacted by the pandemic crisis. The start-up economy is severely impacted by the coronavirus pandemic. Raising capital from investors is more difficult in the current climate and bringing innovations to the market is often delayed, sometimes disrupted.

EIT Climate-KIC shortlisted 19 businesses and invited them to participate in a ‘Climate impact forecast’ workshop and to deliver their five-year ‘Climate Impact Potential’. Different metrics were used to calculate the greenhouse gases emissions reduction potential of the innovation and assess the suitability of the business for the grant.

The nine ventures selected for funding develop innovations in agriculture, energy and industry. They will receive between €320,000 and €500,000 and are now invited to sign an investment agreement.

And on the other hand, Aleixendri has been awarded the Innovation and Women’s Entrepreneurship award by the Spanish Federation of Women Managers, Executives, Professionals and Entrepreneurs (FEDEPE). The FEDEPE awards have recognised, since 1989, those women who have stood out professionally in their professional, managerial and business performance, as well as the companies, organisations and media that have promoted the role of women. These awards have become a reference point for the Spanish business world.

Aleixendri received the award from the president of the CSIC, Rosa Menéndez. “It is an honour to receive this award from a woman whom I admire”, said the aeronautical engineer, who highlighted the “enormous responsibility” she feels since, “at present, only 2% of the 1.2 million sailors in the world are women, and it turns out that only one in ten entrepreneurs in the maritime sector are women”. “There are still great challenges that threaten to transform the oceans forever, and we need all the talent we can get,” she concluded. 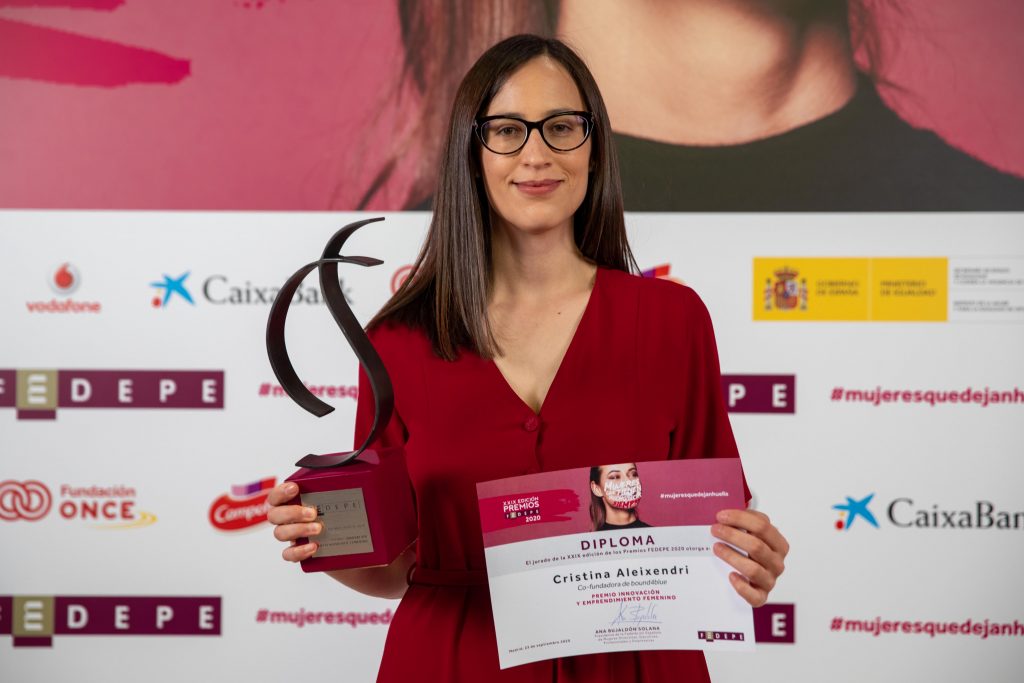 Fundación Valenciaport has organised, in the framework of the...

A LOOP-Ports project Workshop identify and characterise the areas of intervention on Circular Economy in Ports
CLIMATE-KIC NEWS
Cassetex from Bangladesh, Sosei from Uruguay and Carbon Craft Design from Indi...

More than 3,000 entrepreneurs from 56 countries participated in...